Toe the Line vs. Tow the Line 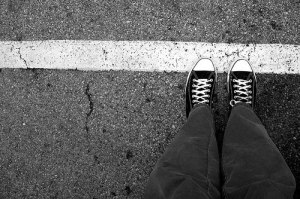 Recently I used the title’s idiom, and to be honest I don’t know if I’d ever used it before in writing; I’ve heard it said onk-times, but never had much use for it so far in written form.  Then came the question, is it “toe” or “tow”?  Actually the original phrase is nautical; but that could still be either spelling.  I did a bit of research, in both etymology dictionaries and a book of naval slang, online and in my library.  The consensus, I present here.

“Toe the line,”  according to Naval History & Heritage, comes from the practice of waterproofing between deck boards with a layer of oakum, pitch and tar, thus creating a striped deck; when the crew was ordered to fall in at quarters they would line up at their designated area of the deck, toes to the line to ensure a neat line for inspection.  Toeing the line was also used as a form of punishment for lighter misdemeanours aboard a ship, such as younger crew members talking at the wrong time; they were made to stand at the line for a specified amount of time to remind them to behave.  A logical leap later and we have our idiom, because the young lads were warned to “toe the line” – they were to mentally toe the line to avoid getting in trouble.

However, “Tow the line” could be seen as a malapropism, a mondegreen, or an eggcorn.  A malapropism (also called Dogberryism) is the substitution of an inappropriate word or expression in place of the correct and similarly-sounding word.  Example:  “Officer Dogberry said, “Our watch, sir, have indeed comprehended two auspicious persons” (apprehended two suspicious persons).  A mondegreen is an error arising from  understanding a spoken word or song text incorrectly.  Example:  “The ants are my friends, blowin’ in the wind” (the answer my friends) – Bob Dylan.  An eggcorn is an idiosyncratic (but semantically motivated) substitution of a word or phrase for a word or phrase that sound identical, or nearly so, at least in the dialect the speaker uses.  Example:  “for all intensive purposes” instead of “for all intents and purposes”.  Depending on your view of things, “tow the line” could fall into any of those categories.  But it has so often been misused that it has begun to develop its own connotation independent of the original idiom:  While “toe the line” indicates a passive agreement or adherence to a particular regulation or ideology, “tow the line” implies more of an active participation in the enforcement or propagation of that “line” whether political, social, or business policy, as towing an object is not passive, but participative.

8 responses to “Toe the Line vs. Tow the Line”