After our holidays in Lugano, mentioned in the last post, I went to Scotland with my husband for a five-day whirlwind visit with friends. Spending time together with them morning and evening, we took day trips out in between and were able to see astonishingly much in that short time!

One of the things we went to see was the Wallace Monument, near Stirling; we trekked up the steep, narrow spiral staircase to the top, stopping along the way at each of three levels before reaching the top (with a stunning view). One of the levels was called the “Hall of Heroes”: Filled with marble statues of Scottish scientists, politicians, shakers and makers of the past centuries, without exception, they were all men. Until this year. Two statues of women have been added, along with 6 pillars of women who were chosen by a panel of judges from among the long list of Scottish women who have been influential in Scottish history.

As the saying goes, “Behind every great man, there’s a great woman”. Many of these women were ignored by history, which is more often than not written down by men, from a man’s perspective, for a man’s world. I’m not a feminist by any stretch of the imagination; but I do have a strong sense of justice, and I am a woman who has often been overlooked and marginalized by society, by prospective bosses, and by mentalities that belittle women solely based on gender. So I take pleasure when I see women from the past being acknowledged for the contributions they’ve made, and I take special pleasure in “undusting” their history for you here on my blog. With that said, here’s the first:

How many of you are familiar with Charles Rennie Mackintosh? Perhaps not the name, but certainly the distinctive art style he is known for: 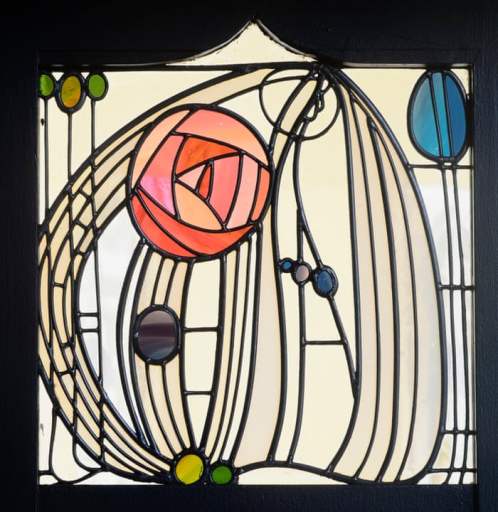 He is frequently claimed as Scotland’s most influential and distinguished artist, yet he once reportedly said of his wife (whom he married on 22 August 1900), “Margaret has genius, I have only talent.” If you look at her own work, you see that she was the main inspiration behind his more simplistic designs; the famous “Mackintosh rose” is clearly seen in her works:

Margaret MacDonald Mackintosh, born 5 November 1864, was part of what was known as the “Glasgow Four”, which included her sister Frances, Herbert MacNair, and Charles Rennie Mackintosh, and during her lifetime, she was recognized for her defining influence in the “Glasgow Art” style of the 1890s, during which period she and her sister opened an art studio together (the MacDonald Sisters Studio at 128 Hope Street, Glasgow) – at a time when women were still very much expected to get married and live a quiet life in submission to a husband. Though she was known and respected in her own lifetime, consequent generations have forgotten her genius; for instance, Charles was famous as an architect, yet in a letter to his wife he wrote, “Remember, you are half if not three-quarters in all my architectural work.” Her interior designs (often mixed mediums, including the use of gesso, beads, metal and textiles) made his buildings typically “Mackintosh”, yet there is not a single mention of her in an article about Mackintosh architecture on a website devoted to architectural design, though they had ample opportunity to give her deserved recognition.

Between 1895 and 1924, she contributed to more than forty European and American exhibitions. She exhibited with her husband at the 1900 Vienna Secession, where her work could arguably be described as an influence on the Secessionists Gustav Klimt and Josef Hoffmann, yet again, she is ignored posthumously.

Ill health decreased her artistic output from around 1921, and she passed away in 1933, five years after her husband’s death. Her artwork lives on, and I hope her legacy earns equal recognition with that of her husband’s as times change, and the women of history begin to receive the recognition they truly deserve.