If you’ve hung around here for any length of time, you know that my curiosity likes to sprint down obscure paths. I recently finished the first draft of my next novel (Woohoo! Now the real work ahead!), and one of the things I was researching was something I wanted to write but then hit that proverbial wall: Do I use pit or seed in this context? And what’s the actual difference between the two, or are they interchangeable? And where does stone or pip come in?

Well, as with any roadsign to curious paths, I pulled out my walking stick – or in this case, the dictionary (as in, Wiktionary). And as you’ll see, just looking it up won’t do – I had to learn a wee bit about botany along the way: 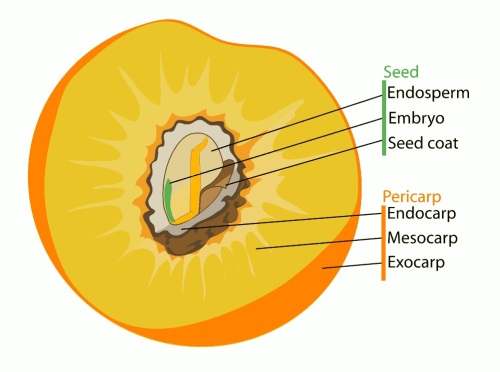 Endo- means within, inner, absorbing, or containing. Peri- means peripheral, or surrounding; Meso- means middle (as in Paleolithic, Mesolithic, Neolithic); Exo- means outer (as in exoplanet); and -carp means part of a fruit or fruiting body. I tend to remember something better if I can make a linguistic leap of understanding, and the suffix carp- actually comes from the Greek word Karpos, which was the mythological son of the west wind and spring (new vegetation), which naturally includes fruit.

In this instance, however, the dictionary wasn’t exactly helpful:

SEED: A fertilized and ripened ovule*, containing an embryonic plant. [*the structure in a plant that develops into a seed after fertilization.]

I don’t know about you, but I found myself none the wiser.

PIT is even more confusing! It’s a seed, stone or pip inside a fruit, or a shell in a drupe (such as a peach) containing a seed.

PIP makes the issue even foggier: It’s a British term for a seed inside certain fleshy fruits (compare stone/pit), such as a peach, orange, or apple!

STONE seems the clearest definition (insert sarcastic tone here): The central part of some fruits, particularly drupes; consisting of the seed and a hard endocarp layer.

If I had to put it in layman’s terms, I’d say it like this: The seed contains the embryo; the pit/pip/stone protects the seed until it’s ready to sprout (and only certain types of fruits have pits); pits are usually singular in a fruit, while there may be one or more seeds.

Pits are found in fruits like cherries, mangoes, peaches, plums, avocadoes, olives and dates. Seeds are found in fruits like apples, oranges, and bananas (the variety of bananas usually sold in stores usually have sterile seeds – what we might call “seedless”). If I can follow this jungle-infested side path for a moment, did you know that bananas don’t actually grow on trees, but are the world’s largest herb, and that they grow upside-down, defying gravity? Another interesting point is that a seedless banana can still propagate itself – I should rather refer to it as clone: Each” tree” (i.e. layers of leaves) produces 1 bunch of fruit and then dies; but its rhizome, below ground, simply sprouts up as the one is dying and repeats the process.

Then there’s the hairy issue of the coconut: Technically, it’s a one-seeded drupe; but it could be considered a fruit, a nut, or even a seed. When you buy a coconut in the store, the outer layers have generally been stripped off: The exocarp is usually green; the fibrous husk beneath that is the mesocarp, and the hard, woody layer we often think of as “a coconut” is actually the endocarp. Every part of the coconut and the palm plant (not tree) on which it grows can be used for something, so it’s often referred to as “the tree of life”.

And let’s not get into figs; they’re technically inverted flowers, and besides, there’s probably a wasp inside there (without the fig wasp, we’d have no figs). Now ya know. Don’t look into that too closely unless you really want to know, because you’ll never look at a fig the same way again.

Learn something new and get smarter every day!