Greetings from the Global Village

Depending on where you are in the world, right now you’re feeling the effects of our global village more or less than others. Here in Switzerland, the Corona Virus is headline news. We’ve had a few cases here – 43; the government has issued instructions on how to sneeze properly (into your sleeve “elbow” or into a tissue), to stay home when sick, and to cease greeting rituals (here, that would involve either hand-shaking, three kisses on the cheeks, or hugs). Gatherings of over 1,000 people have been banned – goodbye, sports fan sections and exhibitions. Below that number, lists of participants must still be kept to trace any spread to a patient zero. This includes our church; it was strange not to hug people, and to checklist who attended. It might be just a matter of time before facemasks are commonly worn in public (they’re sold out here, but I’ve yet to see someone wearing them in public).

The global village is also felt in the breakdown of the chain of supplies for goods; many shelves in our supermarkets are empty. If tin cans are made in some outback area of China that has now been quarantined by the Chinese government, then companies canning foods in Europe don’t get the wares they need to keep their factories running – as soon as one interruption happens, it breaks the steady flow. If enough shelves empty, people begin to panic and hamster supplies. Remember Y2K? The panic induced by the media, in the end, came to nothing. Yet the media are once again being panic mongers by continually focusing on this issue. What else is happening in the world? I have no idea, because the Corona Virus has taken over the world press. What I do know is that this is now the new reality; we’ll just have to get used to it and get on with our lives. 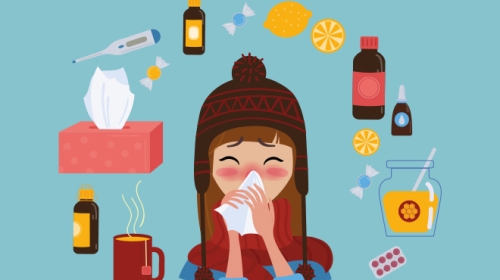 While I take all of this as seriously as it needs to be taken and find some of these measures sensible in any case of sickness, even the common cold, I am also a lover of history – so let me put the present crisis into a larger context:

These statistics shouldn’t induce panic; on the contrary: It shows us that life goes on. We should take precautions and practice sensible hygiene – washing hands when we come home from shopping or work, using hand disinfectant* when out, keeping distance as much as possible between ourselves and strangers when out in public, avoiding crowds of people, and avoiding physical contact with people outside the immediate family. But in the end, it is what it is; we can do what we can do, and no more. [* In case hand disinfectant is sold out in your area, you can make your own: Proportion into a pump or squeeze bottle 1/3-1/2 aloe vera gel (as close to 100% aloe vera as you can get), 2/3 rubbing alcohol or any alcohol with 60% vol. or more, and a few drops of essential oils for scent.]

How we respond to the present crisis will show our mettle; there’s no need to panic, to hoard, or to isolate ourselves behind closed doors. Hopefully, the current climate of raised awareness will linger; that it will teach people to consider others (I’ve lost count of the times I’ve been greeted with three kisses, only to be told after the fact that the other person is sick! I’d rather be warned and be able to have a choice in exposing myself or not, thank you very little…) and to generally adopt more hygienic practices even when sick with a common cold.

For me, far more important than the outward circumstances is the heart of a community that manifests itself in times of crisis. If we could look into individual communities in those past ages, we would almost certainly see people supporting others; groups who united to help the families affected. The human stories would most certainly be inspirational. There are numerous contemporary examples of natural disasters in which people have pulled together, whether locally or internationally, and helped the helpless. I can think of a dozen people in our church who would cook meals or run errands for those who are sick, and I’m sure there are far more people out there willing to step out of their own isolated, daily bubbles – and that’s where such a crisis becomes a blessing to communities, in the long run.