If you were living in the 19th century, before the age of reliable and affordable mechanical alarm clocks, how could you be ensured of getting up on time to get to work? Hire a knocker-up, of course. That’s if you lived in Britain or Ireland. Knockers-up were employed from the time of the Industrial Revolution; the last one retired in Bolton (a former mill town in Greater Manchester) in 1973. Also known as “human alarm clocks” they would use sticks, clubs, pebbles or pea shooters to knock on clients’ door and windows; some would move on after a few taps, while others wouldn’t move on until they were sure the client was up. I wonder who woke them up?

According to the Lancashire Mining Museum, there was a conundrum from the times that went like this:

So our knocker-up didn’t knock us up ‘Cos he’s not up.

The original problem employed knockers-up faced was how not to wake up their paying clients and several of their neighbours on either side for free; they hit upon (no pun intended) the idea of long poles or pea shooters to tap on the upper windows; clients obviously couldn’t sleep in a back room, or they’d never hear the knock. The fees charged depended on how far the knocker had to travel to reach the house and how early said knock needed to be.

In 1878, a Canadian reporter was told by Mrs Waters, of northern England, that she charged eighteenpence a week for those who needed waking before 4 a.m., and for those after 4 a.m., it was a shilling (twelvepence) a week. Those who had to be aroused from five to six o’clock paid from sixpence to threepence.

The miners of County Durham, Ireland, refined the requirements a bit: Built into the outer wall of their houses was a slate board, on which they would write their shift times in the mine; the company-hired knockers-up would then know when and when not to wake them up. These boards were known as wake-up slates or (far better, in my opinion), knocky-up boards.

Here are a few rare photographs of knockers-up knocking up: 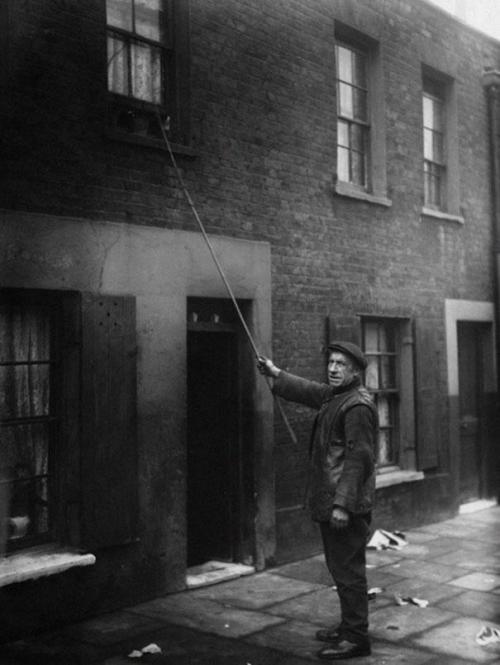 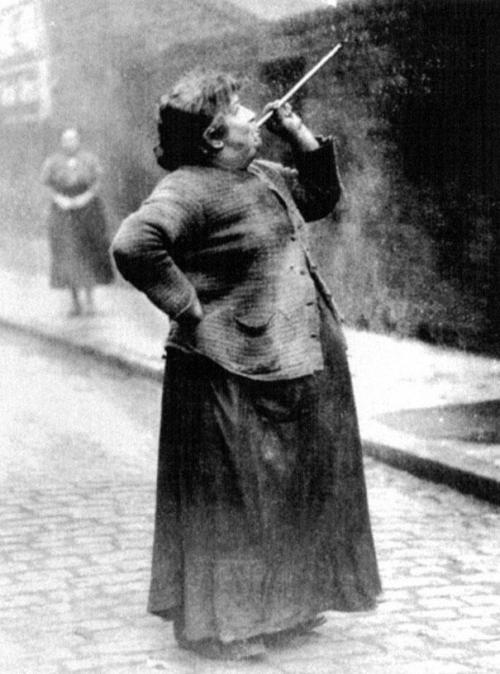 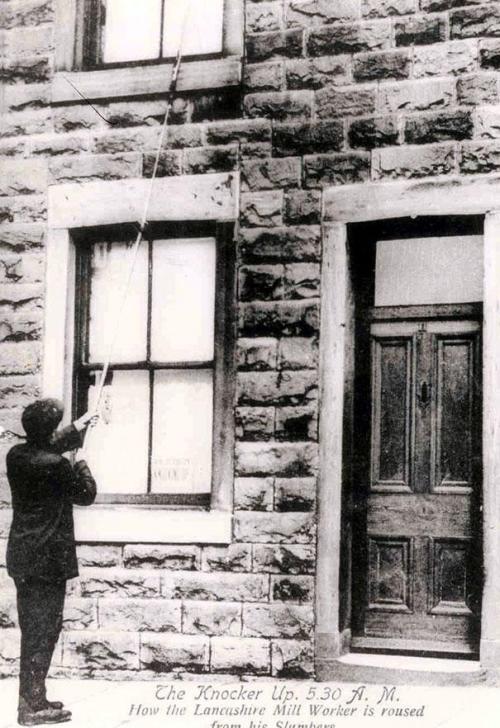 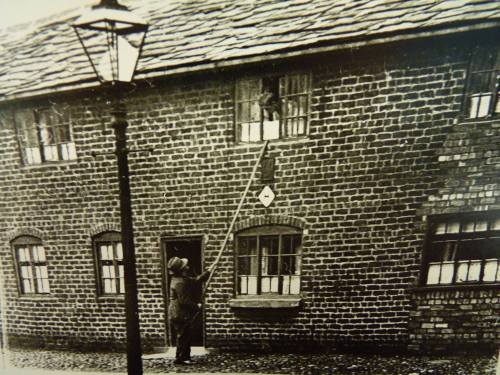 And just so we’re clear, the American English phrase “to be knocked up” (pregnant) has nothing to do etymologically with the British occupation or the sundry adjectives that derived from it. The knockers-up were usually elderly men or women, or even policemen who supplemented their incomes by taking on the task of waking their clients. In fact, one policeman (as told during the inquest) saw no reason to abandon his post as a knocker-up when a man found him on his route and told him that he’d found a dead woman; she turned out to be Mary Nichols, the first victim of Jack the Ripper.