You know how, when you send a postcard from holidays, you’re usually back before the recipient receives it?  Well, same here… I’m back from holidays, and so this postcard has just arrived.  We were away just a week (could always be a bit longer, right?), and enjoyed beautiful weather, storms, rain, sunshine, and time.  Time away from internet connections (there is no wi-fi in the flat there, so the temptation is eliminated!), time to read, to write, to be, to watch football matches of the European Football Championships (that’s soccer to Americans), and to cook good Italian food.

We were in Lugano, Switzerland, otherwise known as the Riviera, or the Monte Carlo, of Switzerland; it’s in the Italian-speaking area, and is nestled along the shores of Lake Lugano.  The top image is the view from our (glass) balcony, unbroken from Castagnola to just beyond Caprino (check it out on Google Earth!), and the lower image is of a side street by the Church of Santa Maria degli Angioli, along the shoreline of Lugano.  Our family holiday flat is in Castagnola, along the flank of Monte Bre, and is our go-to place for a short get-away.

Whenever we’re down there, I switch from whatever manuscript I’m working on to a novel I’m writing that’s based on a house which our flat overlooks, and one that has captured our curiosity for decades:  Villa Helios sat vacant and decaying for over 30 years, and a few years ago began to be renovated.  This year was the first time we’ve seen life in the place.  From what I can tell, it has become either flats to rent, or buy.  There were only one or two flats occupied, as the rest of the windows were still either boarded over or shuttered; at night those windows were lit by small corner-lights to make it look occupied, but it was clear that they were vacant.  It was nice to get away for some quiet time together with my husband, but time there goes by very lazily, so even at a leisurely pace, I still managed over 10K on the novel!  It was especially relaxing to write on it because, just before going on holiday, I finished the manuscript for my 5th novel (the third book in the Northing Trilogy), and was able to send it off to my beta readers before leaving; I could work on the other novel with a “free conscience”.

Now back in the real world, I’m giving myself a short break from writing on my novels so that I can tackle the graphics of the cover, as well as all the bits and bobs that go along with marketing; once I get the beta feedback, it will be time to go through the manuscript again and make any changes necessary.

Here’s hoping you have a great week, and find inspiration for your own writing! 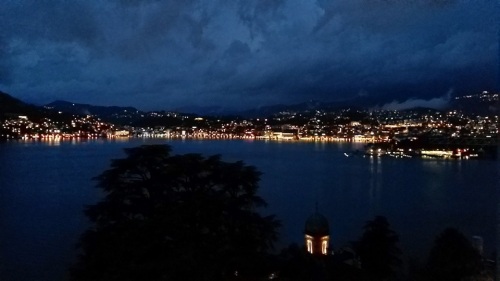 Lugano by night.  Foreground:  The dome of Villa Helios

3 responses to “Postcard from Lugano III”