The title is an apt one this year for me:  In February, we went from having no kids to having a love-starved, distrustful PTSD teenager with defence mechanisms and trauma-induced autism, who, in the first few weeks of her being here, barely spoke intelligible sentences (communication with the outer world is a challenge for her, whether in her mother tongue or not).  She’ll be with us until late-January 2017 as an exchange student, but she’ll be in our lives for years to come, because we’ve become the parents she never had.  When she returns home, we will have to release her back into the abusive situation which caused many of the problems in the first place.  The country she comes from in Asia seems to be stuck in the past by several centuries, especially when it comes to things like psychology; diagnosis and treatment are nearly impossible, simply because they see such things as a weakness that would cause the family to lose face, and in this particular case the fear is that the father would put her on the streets if he found out.  Because of that fact, we’ve not been able to draw on the help of the student organisation’s volunteer psychologist (they would need to inform the father), so we’ve basically been on our own in this complex process; even the diagnosis is my own, having had to apply my research skills into an unknown field and narrow down the symptoms and manifestations, and figure out what we were all dealing with (it’s since been confirmed by friends who work with autistic children).

I have a profound respect for parents who raise autistic children on any spectrum of the condition; I know that our situation is simply not comparable – in a few weeks she will be leaving us; at the same time, we had no preparation for going from zero to a hundred overnight.  We thought we’d be getting the average exchange student; God had other plans both for her and for us – plans that go far beyond a year, touching eternity.

What that’s translated into for me this year is an abrupt shift in long-term goals and the shifting sands of daily priorities getting turned on their heads at a moment’s notice.  If you’re like me as a writer or creative person, an inner irritability arises when I can’t write – not as in “writer’s block”, but as in “as soon as I sit down I’m going to be interrupted, so I can’t even begin”.  Two weeks of this month were school holidays, which meant she was here 24/7 except when she was out with friends (which was unpredictable, and not very often as she enjoys being “home”); one week of that time it was just the two of us as my husband was away.  By 24/7, I mean it – any time night or day, when I was trying to focus, she’d show up in the doorway, whether noon or 3 a.m; parents understand!  We watched films, talked, painted, and did our own things.  By the time she went back to school on Monday, I was ready to have my time for focusing again – I’m sure every mother on the planet can empathise!  She gravitates to me, soaking in my presence; that’s lovely – it means she trusts me, wants to be with me, and gets the attention she craves (and should have been getting throughout her life).  I like spending time with her; but it also means that my priorities – writing, editing, graphics, blurbs, and all of the thousand other steps toward publishing my fifth novel – have taken a back burner; the goal of getting this book out by Christmas had shifted away with the dunes of life by May.  It also means that I can’t really relax – I never know when, after finally sitting down for a moment, I open one eye to find myself being watched.  Literally.  Or I just sit down and hear, “Mom!” from a distance corner of the flat.  Sometimes it feels like every move I make draws some kind of commentary – it’s her way of trying to connect, and I understand that with my heart, but sometimes my mind wishes I could just flip a switch and turn it off for a while.  Again, I know that every mother can relate to those feelings; just keep in mind that I’m not actually the mother, in the sense that I haven’t had years to get used to these things!  She has a great father-daughter relationship with my husband, too – pillow fights, lots of fun and talks at the dinner table, and the occasional ice hockey date are icing on the cake. 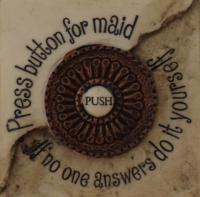 We’ve had to raise a teenager that had basically raised herself the past (very formative) five years (her father bought her a flat in another city, and just paid for a maid).  I am not a maid (this image is a magnet hanging on our guest room door frame).  Everything that parents teach their children along the way over the years, we’ve had to try to teach her within a few months, as far as what it means to live in a family, communicate with each other, and basic principles such as clean up after yourself, turn off lights behind you, shut the refrigerator door, fold and put away clothes neatly, respect others’ property, and the list goes on and on and on.

This family rule sign, which hangs outside our front door, is what we’re trying to teach as a foreign concept in more ways than one… oh, and her mouth would have driven sailors from bars the first fortnight she was here; we started charging 1 Franc for every curse word, and encouraged her to get creative with such things; now she says “Fluff-butt” and “sweet cheese and crackers” instead!  Needless to say, it’s been a huge learning curve for us all.

Sands have shifted; priorities, for this year, have been relentlessly shifted; but more importantly, we’ve seen the shifting sands in one life transform into a foundation planted on solid rock.  We’ve seen her open her heart to be loved, to begin to recognize the issues in her own life that will need professional help once she’s old enough to seek it without repercussions, and also begin to have an understanding and patience for and with herself.  We’ve played a part in rescuing someone from the verge of suicide to a place of eternal perspective, future hope, and present happiness, and we are humbly grateful for the opportunity entrusted to us.  Writing priorities be hanged… there are more important things in this life sometimes.  There is a time for every purpose under heaven.