I believe that people who have made a significant impact on the lives of individuals and nations not only deserve being honoured by remembrance but need to be brought into the spotlight for each new generation.

Though you may have learned something about Oskar Schindler through the books or film about his deeds, chances are you’ve not heard of Chinune Sugihara, whose conscience would not allow him to look the other way when Jews came under the persecution of the Nazis during World War 2. As vice-consul of the Japanese Consulate in Lithuania, he was in an ideal position to save thousands of lives by issuing travelling visas, but at the risk of his own career by disobeying orders.

His story is worth taking a few minutes to read; please click on the two links below, to get a picture of the man who became the only Japanese Righteous Among the Nations. 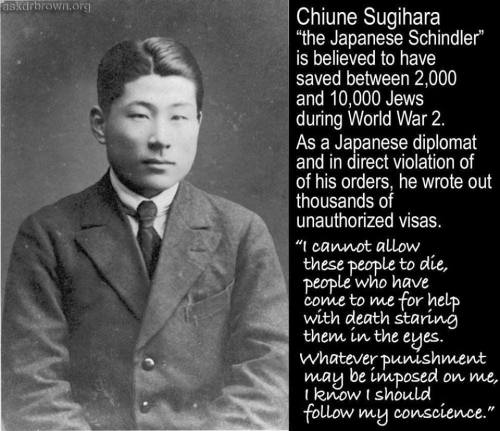