There are only two instances in the English language in which apostrophes are used:

2) Possessives, as in:  Steve’s hat (the hat belongs to Steve), or today’s specials (specials on for today) 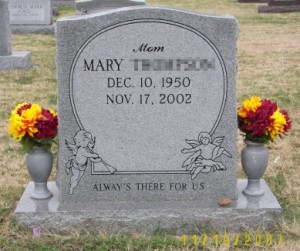 Alway’s there for us. Who is Alway?

Never, I repeat NEVER should an apostrophe be used to indicate a plural!!  Never, EVER.  If you see it used as a plural, it’s wrong – even if it’s on a tombstone (see the image below). 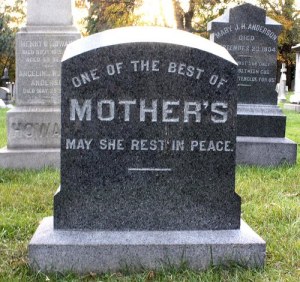 In the illustration on the right, “Alway’s there for us,” it obviously means “Alway is there for us.”  But who is Alway?  I thought Mary was trying to rest in peace here…  It’s just wrong on so many levels, because it’s not even a plural (which they were aiming for), but an adverb.

1) “It” is fairly straightforward; it is the third person singular pronoun (used in place of a noun) for objects or gender-neutral references; e.g. The chair is red = It is red.

It’s not “CD’s” or “DVD’s” as the plural form; this is actually the possessive (which therefore requires an object for that subject’s possessive form, as in the CD’s case), and I find myself asking, “CD’s what?”

If you want more examples, from tombstones to shop signs to tattoos that are embarrassingly wrong, take a look at  www.apostropheabuse.com.  Okay, pet peeve appeased.  Glad to get that off my chest.