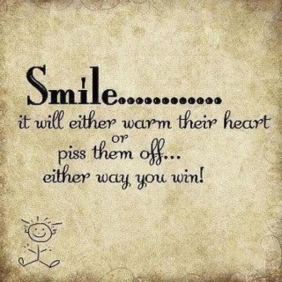 Have you ever stared at a word for days on end?  I have, and coming to the end of the tunnel is bliss.  When writing, I tend to use “place-markers” – anywhere from a single word to a rough-sketch of a scene that I know will need to be fleshed out, moved, replaced or “cannibalized” for a concept.  Some people like to use special writing programs, and I’ve tried a few over the years, but I tend to do all of my writing in Word; it’s got review “post-its” I can type into the side margins, and I’m usually more organized than programs like Scrivener anyway.  When I go back over such sections, I take off my writer’s hat and put on my editor’s cap, and dive in.

I’ve been editing a manuscript, and at the moment I’m focusing on repetitions; the most recent word was smile.  Each time I came across the word, I needed to read the context, think about whether it should be removed, replaced, the sentence reworded, or left as-is.  I’ve discovered that there are not actually that many synonyms for “smile” in the English language; smirk, sneer, grimace, simper, scowl, grin… they each have their own connotations, and are not simply interchangeable – each choice will effect the overall meaning in distinct ways.   as William Blake once said, “There is a smile of Love, And there is a smile of Deceit, And there is a smile of smiles In which these two smiles meet.”  Sometimes it can simply be left out – the context informs the reader about which emotions are being displayed by the characters.  Characters in love have a different smile for each other than for frenemies, or antagonists, or superiors, or subordinates, and each situation in which various characters are combined might result in a different word for smile.  And does one smile warmly, or coldly?  Broadly or tight-lipped?

Sometimes I wonder if I think far too much about such details; but I’d rather think about it once too often and get it right than not.  It might have seemed a tad extravagant for Weta Workshop to emboss the inside of King Théoden’s breastplate armour for the Lord of the Rings: The Two Towers, and Return of the King (in which the character appears), knowing it would never actually be seen in the films; but Bernard Hill, who played the king, said that such details helped him easily slip into the role, even feeling the nobility of a king, and it thus enhanced and influenced his performance.  As visuals matter in epic films such as LoR, words matter in writing a novel, drawing the reader into the imaginary landscape of the world the author creates.

They also matter in script-writing:  In Ever After, starring Drew Barrymore and Dougray Scott, some of the dialogue lines are just downright embarrassing – especially those of Anjelica Huston:  They go to the trouble of being opulent and period-accurate in costumes, locations and scene dressings, and then throw in lines like Relax, child and I’m management!  The editor in me cringes.

One man’s smile is another man’s smirk; one woman’s grin is another woman’s sneer.  Now, on to the next item on my list of editing revisions!