Back in the Land of the Living

Last week I took a much-needed break from the computer after launching my latest novel, The Cardinal (Parts One & Two)!  It is such a complex story with rich landscapes that it deserved the room to breathe and unfold, and so it became two novels, though that decision didn’t come until well into the second draft.  When it was all said and done, I had formatted two books, twice each (one format for Kindle, one for paperback), designed four covers, written countless versions of blurbs, etc., and gone through the publication process four times.  Trust me, I’d seen enough of my computer at that point to have a love-hate relationship with it for a while.  During that break I managed to read five books in a week, not a single one of them research-related for the next project!  I’ve since made peace with my computer, and I’m beginning work on the next novel – this time, back to the 18th century to complete the Northing Trilogy.  I’m looking forward to exploring this new aspect of characters I already know well from the previous two novels; it will take me through the grime of workhouse orphanages and the salty brine of the British navy in the mid-18th century, and already the research questions accumulating portend at least one trip to London, which is one of my favourite cities anyway, and I’m sure you’ll hear more about that in the months to come. 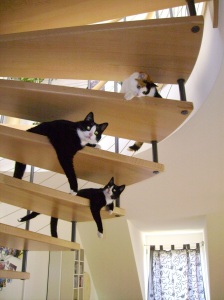 The Three Culprits: Gandria, Caprino and Allegra (top to bottom)

With all of the push and shove of getting the books ready to publish, Christmas has snuck up on me!  It hit home this weekend, literally, when we put up the Christmas decorations:  Here in Switzerland it’s usual to put the Christmas tree and decorations up on Christmas Eve, so we’ve struck a compromise between our varying cultures and aim for the first Advent; it’s also a pragmatic compromise as, if we’re going to go to all that effort, we might as well enjoy it a bit.  We went to the first Christmas market of the season, complete with hot wine punch, roasted chestnuts, and Christmas shopping.  If any of you have cats, you’ll empathize with me on one point:  As we walked through the market, again and again we saw things that we liked, “But…”  A nice wind chime made of drift wood, stones and feathers in perfect balance?  Cat toy.  Ditto for the man-sized candle holder made of stones & driftwood.  Scratching post.  Now mind you, our cats are well-behaved, and they only scratch on their scratching post; but there’s probably too little of a difference to their perspective between the allowed version and the decorative, expensive version…  Any cloth craft item is like catnip to our calico, Gandria – she carries off anything cloth she can get into her mouth (she’s even learned how to unzip my husband’s backpack; her favourite thing to steal is his tissue packs).

All of that just to say this:  I have now re-entered the land of the living after having been sequestered with my book manuscripts in the final polish and publish phases.  I’m more than ready for holidays, and blogging, writing, researching, plotting… in short, starting the next manuscript.