Recently, my husband was catching up with the articles on my blog, and he made the cheeky comment that I’d written about everything except the history of bells. Now, I know that’s not true – there are other things out there I still have yet to discover – but I took up the challenge; hence, this post. The history of bells, or of anything, for that matter, is an audacious title; as Mark Twain once said, “The very ink with which all history is written is merely fluid prejudice.” At best, such an online article can skim the surface of any historical topic; my purpose is not to give an extensive report – it’s to whet your appetites to search out history for yourself. I “undust” it for you – it’s up to you to grab it by the horns and hang on.

Every country has their favourite bells: Americans have the Liberty Bell (“At noon, on the Fourth of July, 1826, while the Liberty Bell was again sounding its old message to the people of Philadelphia, the soul of Thomas Jefferson passed on; and a few hours later John Adams entered into rest, with the name of his old friend upon his lips.” – Allen Johnson); the Brits have Big Ben (it’s the actual name of the bell, not the clock tower) and other, regional celebrities; the Russians have the Tsar Bell, in Moscow; the Polish have the Sigismund, located in Wawel Cathedral in Krakow, Poland. but where did they come from originally? What was their original purpose?

The oldest known bell is from around 2000 BC, from Neolithic China, and it was made of pottery tiles. As far as historians can deduce, the bell has always been associated with two social functions: As a signal for messages, such as when a work day would begin or end, and for calls to religious ceremonies or as reminders for specific times of day for various rituals. The sound of bells have always been associated with divinity, likely because it was a sound unlike any natural sound known to the people who heard them ringing out over a great distance – they could hear them, but not see the source of the sound. In ancient times, when most people were both uneducated and superstitious, it’s not hard to follow such reasoning.

Bells can range from tiny jingle bells to several tonnes; the Great Bell of Dhammazedi was the largest bell ever made, in 1484, for King Dhammazedi of Hanthawaddy Pegu (Lower Burma), and weighed 327 tonnes. It was placed in the temple of Shwedagon Pagoda and stolen by the Portuguese – whose ship promptly sunk under the weight of the bell.

Today, church bells still ring out across Europe, calling parishioners to church services, as well as ringing out on the hour to mark the passing of time. They ring out in special ways for various celebrations, whether weddings or holidays such as Christmas, New Year’s Eve, and Easter. 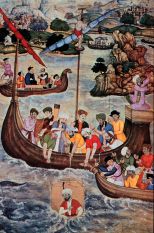 Certain kinds of bells hold special value: Ship’s bells are like catnip to divers – they’re the primary method of identifying ships, as their names are engraved on the bells even long after the painted names on the hulls have succumbed to the sea; they are a wreck-diver’s trophy of desire, and always hold special place in their collections. An interesting link between diving and bells is that the first actual diving bells – the rigid chambers designed to transport divers from the surface to the depths and back – were shaped like ringing bells; the air would be trapped in the upside-down chamber, allowing a person to be underwater and still breathe. The first description of its use is recorded by Aristotle in the 4th century BC; the most famous diver from that period is Alexander the Great.

English has many idioms associated with bells: Alarm bells ringing (or set off alarm bells, or warning bells going off – i.e. your mind is warning you about a danger or deception in a particular situation); to be as sound as a bell (to be healthy or in good condition); when something has (all the) bells and whistles (extra or entertaining features or functions that aren’t necessary, but nice-to-haves); Hell’s bells! (an expression when one is surprised or annoyed); something rings a bell (i.e. sounds familiar); saved by the bell (i.e. a difficult situation is ended suddenly by an unforeseen interruption); with bells on (i.e. if you go somewhere or do something with bells on, you do it with great enthusiasm or energy); to bell the cat (i.e. undertake a difficult or dangerous task); something to be as clear as a bell (i.e. clearly understood); pull the other leg/one – it has bells on it (i.e. you don’t fool me); one can’t unring a bell (once something has been said or done, you can’t unsay or undo it); the final bell (the end of an event or, euphemistically, a life). I’m sure there are more – if you know of one, please leave it in the comments below!

There is also a powerful experience written by Corrie Ten Boom, a Holocaust survivor, about the Bells of Forgiveness – you can read her story here.

If you’ve got an hour to spare, BBC has an hour-long “History of Bell Ringing” video on YouTube.

So there you have it: Bells, undusted, to pull your rope cord and get those bells ringing in your head, to find out more for yourself!